Nickel-based alloys and nickel-containing stainless are playing key roles in an emerging source of renewable energy known as thermal solar plants or concentrated solar power (CSP). The use of nickel-based alloys and nickel-containing stainless has enabled the solar power industry to overcome challenges in heat transfer and thermal storage technology.

According to the International Energy Agency (IEO 2017), consumption of energy from renewable energy sources (including CSP) will grow at 2.3% annually between 2015 and 2040. Today, there are currently more than 40 solar thermal power plants operating around the world, with another 20 either in the planning stage or under construction. They tend to be located in areas with high solar irradiance such as Spain, India, South Africa, China, Chile, Australia, Middle East North Africa region (MENA) and the southern United States.
Demonstration CSP plants began operating as early as the 1980s. Since then, advances have been made in both collection and energy storage. The solar tower is one concentration technique that has been developed. The design utilises molten-salt as a heat transfer fluid. Mixtures of nitrate salts typically melt at or above 130 °C (268 °F). They are maintained as liquids at temperatures of 288 °C (550 °F) in an insulated storage tank. The liquid salts are then pumped through tubes in a solar receiver where the concentrated radiation heats them to temperatures up to 566 °C (1,050 °F). The hot liquid is then sent to a high-temperature storage tank. The hot tanks are also insulated and can store thermal energy for extended periods.
Thermal Energy Storage (TES) is used to compensate for varying demand and ambient conditions. When required, molten-salt is pumped to a steamgenerator to produce steam for driving conventional turbines and generators. TES represents a distinctive advantage over other large utility-scale, renewable energy sources and can in some circumstances eliminate the need for backup fuel for power generation. During the summer of 2013, a moltensalt tower system in Spain continuously produced electricity 24 hours per day for 36 days – a first-time achievement. 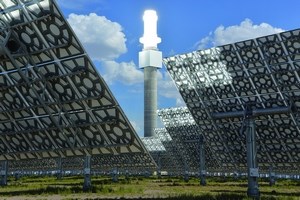 SOLARRESERVE
Crescent Dunes, is located at Tonopah, Nevada in the desert north of Las Vegas. It has a net electrical generating capacity of 110 MW and ten hours of TES. This means that the plant is able to generate power under full load for up to ten hours during peak demand.

One operating plant of this type is Crescent Dunes. Located at Tonopah, Nevada in the desert north of Las Vegas, it has a net electrical generating capacity of 110 MW and ten hours of TES. This means that the plant is able to generate power under full load for up to ten hours during peak demand. The sun is reflected from over 10,000 heliostats that focus energy to the receiver located at the top of a 200 m (640 ft) tower. Each heliostat is made up of mirrored facets which add up to an area of 115.7 m2 (1,245 ft2). The total collection area is over 1.2 million m2 (12 million ft2). Commercial start-up began in 2015.
Since that time Crescent Dunes has produced over 173 GWh of electricity, and it is estimated to provide peak power for 75,000 homes. CSP with solar tower(s) and molten-salt is the design basis for new planned projects in South Africa, Australia and Nevada. The 100 MW South African Redstone project will provide peak power to approximately 200,000 homes, and have a TES of 12 hours. A new, larger scale Nevada project will have a capacity of 2 GW (2,000 MW) with 10 solar towers. The use of stainless steel and nickel alloys has made higher temperature systems viable, where handling moltensalts was previously a challenge.
Designers and engineers have turned to nickel-based alloys such as UNS N06617, N06625 and N06230 for receiver tube applications due to their high-temperature strength sustained over long periods – known as creep resistance. These alloys remain stable at the operating temperatures primarily due to their high nickel content, and have high oxidation resistance as well. Stainless steel Type 347H (S34709) is used for the high-temperature storage tanks.

1. Sunlight is concentrated and directed from a large field of heliostats to a receiver on a 195 m (640 ft) tower
2. Liquid salt from the cold salt tank is pumped through the receiver where it is heated to 566 °C (1050 °F)
3. The heated salt from the receiver is stored in the hot salt tank
4. Hot salt is pumped from the hot salt tank through a steam generator to create steam, which drives a steam turbine, generating electricity
5. Cold salt at 288 °C (550 °F) flows back to the cold salt tank
6. Condensed steam from the steam turbine is recirculated for reuse

About the Nickel Institute

Nickel Institute is the global association of leading primary nickel producers. Its mission is to promote and support the use of nickel in appropriate applications. NI is the centre of excellence for information on nickel and nickel-containing materials and has offices in Asia, Europe and North America. www.nickelinstitute.org. 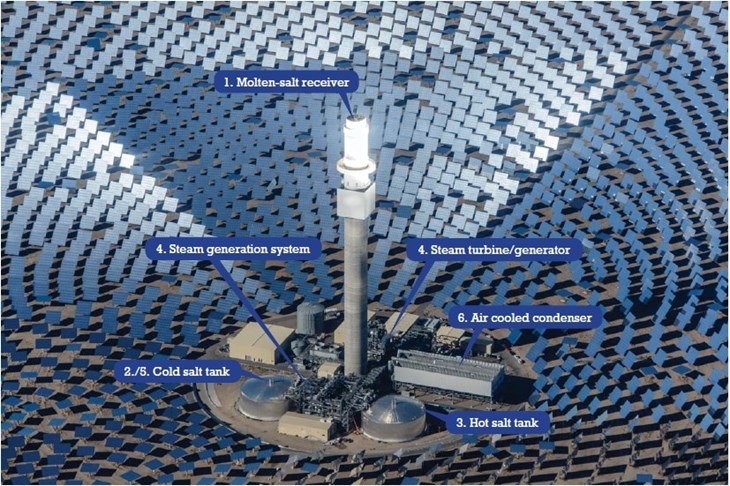