Until recently, green revolution in energy was held up by lack of storage, which meant that efficient electricity production depended on an impossibility; namely uninterrupted wind and sunshine. Conversely, the excess energy produced during strong wind or sunshine could not be stored for later use. Now a revolution in energy storage is occurring, and it is possible not only to store green energy but to convert it to other uses, in other words to recycle it.

At times the wind blows so hard or the sunshine is so strong that it has met the totality of demand in a given country over a certain stretch of time. Thus in March 2014 Portugal’s renewable energy output exceeded demand by 3.6%. On 9 July 2015 Denmark produced 116% of its electricity needs from wind turbines. The same thing has happened in Germany twice this year already: on both 1 January and 1 May, output from renewable briefly exceeded demand. Some islands, such as Orkney and Iceland, are able to supply 100% of their energy needs from renewables all the time. In other countries the benefits of 100+% renewables are experienced far less frequently, usually during periods of low demand such as holidays or at night time.
What do you with the excess energy? Denmark and Germany can export it; however, the infrastructure is not always available to carry the electricity away, in which case the energy has to be stored instead. Once it is stored, it can be used in two ways: either it can be reconverted into electricity that is added to the grid when demand is high, or it can be recycled for use in vehicles. One project in the United States does both. NREL’s Wind2H2 demonstration project at the National Wind Technology Center near Boulder uses energy produced by wind turbines and photo voltaic cells (PVs) to produce hydrogen (H) via electrolysis. The H is then stored, to be used later at a hydrogen fuel station or to be converted back into electricity for use on the grid.

– Almost 90% of renewable energy in Europe comes from wind power.
– The French for “wind power” is “énergie éolienne”, named after the classical God of the winds, Aeolius.
– The Dutch word for “hydrogen” is “waterstof”, which literally means “water material”.

Hydrogen has several industrial applications. One of these is fuel for use in heavy vehicles. Several projects use electricity generated by renewable power to make hydrogen that can be used in vehicles. In Denmark, the Hybalance project is about to go on line. This is a hydrogen plant that would produce hydrogen by electrolysis using electricity generated by wind turbines. In the Netherlands AkzoNobel and Gasunie are jointly investigating the possibility of using wind and solar energy to power an electrolyis unit. The stored hydrogen so produced would be enough to power 300 buses. A final investment decision is awaited in 2019.

There are other ways to recycle energy stored as hydrogen. For instance, it can be injected in small quantities into a natural gas grid. This first occurred on an industrial scale in 2013, at E.ON’s P2G unit in Falkenhagen in East Germany. When demand is low and output high, the excess electricity is converted to hydrogen by electrolysis and injected into the natural gas network.
Hydrogen can also be reacted with CO2 to produce methane and water (using the Sabatier reaction, discovered by Paul Sabatier in the 1910s). Previously this process was relatively inefficient, but recent breakthroughs in catalysis are making it easier to commercialize. The first industry-scale power-to-methane plant was realized by ETOGAS for Audi in Werlte, Germany, and is used in Audio’s CNG vehicles. 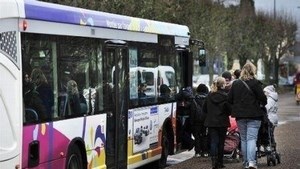 The Eolbus, a new hydrogen bus that will soon
be deployed in several European cities.

Hydrogen is a candidate fuel for cars and heavy vehicles, such as buses, trucks and mining equipment. Brazil, a major exporter of buses, ran a project financed by the World Bank to introduce hydrogen buses to São Paulo in 2009. In Europe, Mercedes Benz’s Citaro buses operate in several cities. Currently, Europe is conducting an ambitious project to recycle excess wind energy as hydrogen for use in buses. Three French communes are involved. One of these, Auxerre in the department of Yonne, will deploy 23 new hydrogen buses by 2023. The new Eolbus, as it is called, will also be introduced in Pau and Toulouse, and elsewhere in Europe in Brighton, Cologne, Düsseldorf and Rotterdam.
In Auxerre, the energy will come from wind turbines right on its doorstep. Yonne is richly endowed with wind turbines, most of which are located near the A6 motorway that links Paris to the south of France (the Autoroute du soleil). Auxerre will also see a new electrolysis plant and hydrogen fuelling station, the largest in France. Thus the whole supply chain will be localized, creating much needed jobs.

Hydrogen in its liquid form causes materials to become brittle. To avoid this, stainless grade 316L, which is resistant to H embrittlement, is often used for the wetted parts that come into contact with liquid H, such as pressure transducers, heat exchangers, humidifiers, combustors, and fuel cell plates. Heat, high pressure and humidity (in the form of water, the only waste product) also tend to cause corrosion, another reason to use stainless steel in fuel cells. Other materials, especially graphite, are sometimes used, but stainless is favored because of its low cost, thin gauges and machinability, plus the fact that vehicle manufacturers are already familiar with it.
Stainless steel is used on fuel cell bipolar plates, as they have to be chemically resistant. To increase corrosion resistance, these are coated with materials such as graphite, noble metals, metal nitrides or metal carbides. A disadvantage is that the oxide layer can become so thick that it impedes contact between the electrode plate and the membrane backing. However, 349TM austenitic and 446 ferritic have proven effective in overcoming this. Sandvik provides precoated strip steel for the production of bipolar plates and interconnects for different types of fuel cells, made of ferritic type 441 (EN. 1.4509). Another application for stainless could be in the bodies of the hydrogen buses themselves. Because stainless steel is stronger, lighter and offers more crash resistance than ordinary steel, the frames of modern buses, however they are fuelled, are often made of such grades as 304 austenitic, ferritic or duplex.

Hydrogen as fuel is an immensely promising technology for dramatically reducing carbon emissions, pollution noise and dependency on fossil fuels. At the moment, however, it is very expensive and very dependent on public funding. (It also has it detractors, including Elon Musk, co-founder of Tesla electric cars, who disparagingly referred to “fool cells”). But costs could fall as electrolysis technology improves and efficiencies of scale are achieved. Efforts are under way to improve catalyzer performance and find alternatives to expensive platinum. Another idea, being pioneered in the Netherlands by a consortium led by HYGRO, is to incorporate an electrolysis unit into a wind turbine, an integrated approach that aims to lower the cost of producing hydrogen. The energy so produced will be fed into the grid, though in the longer term a hydrogen gas network is envisaged, since it is cheaper to transport hydrogen by pipeline than to transport electricity by cable.

In many parts of the world hydrogen fuelling stations are too rare for the new technology to be used efficiently, but public support and planning could achieve greater economies of scale. Although electric and hybrid are cheaper, hydrogen is cleaner, as it does not depend of lithium batteries.