The Kelpies are one of the largest equine sculptures in the world, standing almost 37 meters (130 feet) tall. Located near Falkirk in Central Scotland and created by artist Andy Scott, they are the largest public artworks in Scotland and are constructed entirely of 316L stainless steel.

Andy Scott explains his artistic vision: “The theme of working horses captured my imagination and drove the project. Clydesdales, Shires and Percherons, the equus magnus of the north, are the embodiment of the industrial history of Scotland and the Falkirk / Grangemouth area.  Heavy horses would once have been the powerhouse of the area, working in the foundries, the fields, farms and of course the canal itself, pulling boats along the Forth & Clyde from coast to coast.”

“The materials of the sculptures are deliberately those of Scotland’s former industrial heartland, steel construction on an architectural scale: equitecture.  The towering horse heads have an industrial aesthetic with structural columns and beams visible through the riveted laser cut steel plates of the skin, the manes rendered as geometric overlapping slabs of steel.  The entire structures are illuminated inside and out to create a stunning spectacle in hours of darkness. They stand as a testament to the achievements of the past, a paean to artisanship and engineering and a declaration of intent for the future of Scotland.”

The Kelpies stand as striking gateway features at the eastern entrance to the Forth and Clyde Canal.  Placed either side of a canal lock, the Kelpies form the centrepiece of the Helix Project near Falkirk. This community-based scheme includes various parks with access for walkers and cyclists as well as a canal providing access for vessels to and from the Firth of Forth.
Falkirk Council and Scottish Canals were very keen to introduce a major piece of public art within the park and they approached Glasgow based sculptor, Andy Scott back in 2006. Andy had produced a number of pieces for various locations in Scotland and had a long association with equine sculptures; his Heavy Horse piece has stood beside Glasgow s M8 motorway for over a decade.
Normally Andy Scott would undertake the manufacture of his pieces of public art himself; however creating two heads almost 37m high requires a different approach. Works of this size, whilst still being pieces of art, have to be designed and developed as structures in the same way one would approach the building of a bridge. Consultant engineers Atkins developed a working design which was used as the basis for the eventual procurement process.
One of the biggest challenges was scaling up Andy’s models which were created by carefully welding together hundreds of individual small plates. Creating something ten times the size of the original models needed a different approach. Atkins solution was to clad the heads with much larger panels, profiled by a laser.
SH Structures secured the project on a Design & Build basis as Principle Contractors. Their solution was to create an internal tubular frame which closely followed the profile of the internal surface of the skin. Stainless Steel World spoke to Tim Burton from SH Structures to learn more about how The Kelpies were built.
“Stainless steel grade 316L was chosen as the best material for The Kelpies as it was possible to recreate the appearance of the artists’ original models,” explains Tim. “The stainless plate provides the silvery finish of the Kelpies models created by Andy Scott with a durable surface that will require minimal maintenance in years to come.” 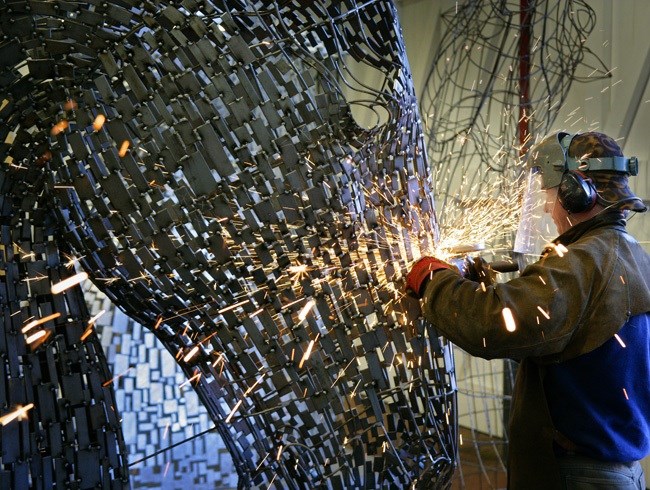 “Each of the two horse heads used around 150 tons of stainless steel plate, with a similar amount of mild steel tubular internal framing. The heads are made out of individual pieces of mild steel plate which were then galvanized. The surface is created from a myriad of profile cut stainless steel plates, mounted on to an internal structural steel skeleton.”
All of the stainless steel used in the project came from Outokumpu, with the raw material coming from mills in Finland and then processed in the company’s UK base in Sheffield. The mild steel tubes were all Celcius 355 grade hollow sections provided by Tata Steel mills in the UK at Hartlepool and Corby.
“The structural frame was built up of a series of primary tubular trusses, which in turn supported a series of tubular secondary frames to which the skin or cladding brackets were fixed.  The brackets are mild steel with a stainless steel face plate that interfaces with the cladding, which required careful choice of welding procedure and consumables.”
Contact the Editor to read the full article which contains more technical details on this project.