At temperatures above 400°C the service conditions become more aggressive and attack the tubes by means of hot corrosion. At these temperatures the creep strength of the material becomes the defining factor and not yield strength, which is the case at normal temperatures. The structural stability of the material also becomes very important.

Tubacex high temperature grade Tubacex 253MA is suitable for many high-temperature conditions and may provide substantial savings by increasing the service life of components as compared to other standard stainless steel grades.

Tubacex 253 MA is an austenitic 20Cr 10Ni + Si type of alloy with very well defined contents of rare earth metals (REM) and nitrogen (Figure 1). The REM in combination with the silicon contributes to the alloy high oxidation resistance and the nitrogen to its high creep strength and structural stability up to high temperatures. Maximum service temperature reaches 1150°C.
Tubacex 253 MA has silicon in its chemical composition which helps in the formation of Silicon oxide layer (SiO2) in addition to the already existing protective oxide layer (Cr2O3), hence preventing the diffusion of oxygen and carbon present in the service condition and there preventing a risk of oxidation and carburization (Figure 2).
Silicon (Si) – Provides additional protective silicon oxide layer REM (Ce) – Provides thinner, tougher and more adherent oxide Nitrogen (N) – Raises the strength and delays the precipitation of sigma phase The presence of micro-alloying elements such as Cerium helps the oxide layers to remain integral to the tube in service conditions resulting in a better protected tube

The high carbon and nitrogen contents present in Tubacex 253 MA are mainly responsible for the superior high creep strength of this grade compared to other high temperature grades (Figure 3). This fact is due, on one hand, to the solution hardening effect produced by these elements and on the other, to a precipitation hardening effect generated via precipitation of fine chromium carbides and nitrides.

Tubacex 253 MA presents a fully austenitic matrix. Due to a lower chromium and a higher nitrogen contents, the alloy is much less sensitive to sigma phase formation than other high temperature grades, such as AISI 309S, 310 and 310S. Sigma phase severely impairs toughness, ductility and corrosion resistance. High carbon and nitrogen can lead to the formation of chromium carbides and nitrides, which can reduce toughness and corrosion properties but with an effect less pronounced than sigma phase. 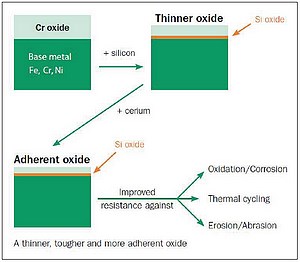 – Tubacex 253 MA has an extraordinary resistance to oxidation. The well-defined composition of chromium, silicon and micro-alloying with REM produces a strong adherent tough complex oxide film of SiO2.Cr2O3. The oxide film of silicon and chromium provides a low diffusion rate for oxygen and metal ions, which retards the oxide growth and thus imparts a high oxidation resistance to the alloy. Micro-alloying assists in anchoring the oxide to the matrix thereby preventing oxide rupture and scaling. All this is particularly beneficial under rapid fluctuations of temperature (cyclic oxidation conditions). As shown in Figure 4, Tubacex 253 MA presents better cyclic oxidation response than 309S and 310S steel grades.

– Sulfur has a very negative effect on the service life of exposed components. Sulfides (especially lowmelting point Ni-bearing sulfides) can form and attack the underlying metal through cracks or pores present on the protective oxide layer. Tubacex 253 MA is very resistant to sulfur containing atmospheres (superior to AISI 309, 310 and the nickel alloys) mainly due to two reasons: 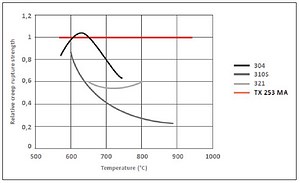 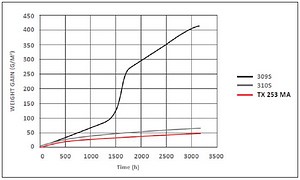 In highly reducing conditions, when the formation of the protective oxide layer is difficult, steel grades with higher chromium content and less or no nickel are more appropriate.

– The risk of using nitrogencontaining atmospheres is that, when nitrogen diffuses into the underlying metal, chromium nitrides can be formed. Chromium nitrides have an embrittling effect and also, due to their high chromium content, produce a chromium depletion in the adjacent areas that impairs the corrosion resistance of the material. To avoid this, a dense protective oxide layer is needed.

Ni content is also important as this element doesn’t react to form nitrides. Provided that traces of oxygen are present, Tubacex 253 MA has very good nitriding resistance (better than AISI 309 and 310) due to the nature of its protective layer (thin, tough and adherent). In atmospheres with no or very little oxygen, such as cracked ammonia gas, grades with higher nickel (AISI 314, 310, Alloy 800H) show superior resistance.

– To prevent carburization, which produces embrittlement and damages the corrosion resistance of stainless steels, the most effective protection is a solid oxide layer. Tubacex 253 MA, with REM and silicon additions, develops an improved scale (thin, tough and adherent) that makes this grade highly resistant to carburization compared with other grades such as AISI 310 and Alloy 800H.

When the atmosphere is alternately oxidizing and carburizing, the protective scale tends to grow with exposure time and it may break. In such a case, carburization can progress through the damaged oxide layer. Under these conditions, Tubacex 253 MA is less resistant than grades with higher chromium and nickel (AISI 314, 310, Alloy 800H).

Tubacex 253 MA with its improved properties for cyclic oxidation and excellent creep strength and structural stability at temperatures up to 1150°C, can be a good alternate solution to high alloy materials such as 25Cr/20Ni grades and Alloy 800H.
Applications for TX 253 MA can be in the following areas: