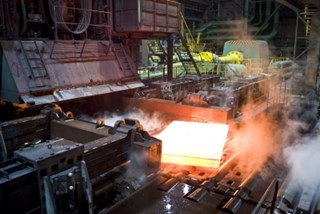 For centuries the town Ilsenburg, located at the foot of Brocken
mountain, has been known for its iron and steel industry and
metal processing for centuries. Photo ©Ilsenburger Grobblech GmbH

Fuel tanks, wind turbines, production platforms and suspension bridges around the world have one thing in common: highly resilient and high-performing plate from Ilsenburger Grobblech GmbH (ILG), located in Saxony-Anhalt, Germany. As a subsidiary of Salzgitter AG, it produces approximately 700,000 tonnes of heavy plate for a wide variety of industries every year.
A recent success story for ILG is the production of low-temperature tanks for liquefied natural gas, which are used on the cruise ship AIDA Nova, among other applications. 300 tonnes of 9% nickelalloyed steel heavy plate were built into the cruise ship in order to ensure the energy supply by means of liquefied natural gas (LNG) instead of the usual heavy oil.
The AIDA Nova is the first of six ships to be equipped with this technology. The nickel alloy meets the high safety regulations of liquefied natural gas (LNG) storage at temperatures of −162 °C. In addition, in collaboration with the steel service centre of its sister company Universal Eisen und Stahl GmbH in Hanover, it is possible for ILG to deliver the material for the tanks tailored and ready for installation. By converting from heavy oil to LNG propulsion, the ships emission of CO2 is reduced by up to 25% and other emissions are also lowered significantly. This is an important contribution to the mobility of the future and to more environmentally compatible navigation for the protection of the oceans.
“There are only a few manufacturers worldwide that produce steel with 9% nickel alloy,” explains Jens Spanger, authorised signatory for the sale of heavy plate. “With plate of this quality, we occupy a niche in a future market.” The Johan Sverdrup project in Norway, has been another success story for ILG. The Johan Sverdrup is world’s largest oil rig in jacket construction with a height of 140 metres. The 26,000 tonne colossus consists largely – approximately 20,000 tonnes – of Ilsenburg heavy plate in offshore qualities with single-piece weights of the plate of up to 28 tonnes. 75,000 tonnes of quarto plate from Saxony- Anhalt are also built into the world’s largest natural gas field, the South Pars Field in the Persian Gulf.

For centuries the town Ilsenburg, located at the foot of Brocken mountain, has been known for its iron and steel industry and metal processing. What began in the 16th century will be continued in future as well by innovative companies such as ILG.
Following an extensive modernisation in the 1980s, in 1992 the Ilsenburg rolling mill was acquired by what was then Preussag Stahl AG, the predecessor to today’s Salzgitter AG, as one of Europe’s most modern plants. With investments of over EUR 400 m in the last few decades, the market position has been further strengthened and expanded. The latest and so far biggest individual project is the construction of a complete heat treatment line, the heart of which is a roller chain for plate refinement. The facility is to be commissioned in spring 2020.