The tungsten arc welding concept, originally introduced as a practical tool in 1950, is now established as the most versatile technique for producing fusion welds to the highest quality standards.

A temperature of around 4,000ºC is generated in the arc during welding and the role played by the electrode is therefore crucial. It must have a high melting point and it must be non-consumable: tungsten quickly established itself as the most suitable material. As the knowledge of arc characteristics increased however it became clear that the use of pure tungsten presented some limitations on process development, particularly arc starting, stability and electrode wear. Early research showed that the addition of thoria resulted in overall improvements in performance and from this work a range of tungsten electrodes containing oxide additions or ‘dopants’ were introduced progressively.

Despite the clear significance of electrode composition the last 60 years has witnessed the publication of few scientific papers of practical use. Some of these advocate the widespread use of dopants on the basis of improved welding performance, some highlight the hazards associated with them. Evidence supporting results of these trials is flawed however and cannot be used as a basis on which to make generalised conclusions. Here we present an objective review of what has become an emotive issue – the use of dopants in tungsten electrodes. The issues under examination fall generally into two categories; those associated with technical and commercial advantages, and those relating to health hazards.

A major advantage of tungsten as a welding electrode material is its low work function – the energy needed to remove an electron. This is an essential requirement for efficient arc generation. Dopants reduce the work function and thus enhance electron emission. As a consequence, this increases the usable life of the electrode and can also promote arc starting and stability.

The most commonly used additives are oxides such as thoria (ThO2), zirconia (ZrO2), lanthana (LaO2), yttria (Y2 O3) and ceria (CeO2) and some of these are classified in Table 1 along with their respective work functions. Some electrodes (1) contain complex mixtures of rare earth oxides, referred to as multivariate electrodes, and these are known to lower the work function further.

Although the electrode material has a considerable influence on the ease with which an arc can be initiated there exist several other controlling factors. Among these are arc gap, tip geometry, open circuit voltage, welding current, shielding gas and the characteristics of the welding power source.
With so many interacting variables experimentation is time consuming. The relative arc starting performance of any one electrode varies with other parameters; the most difficult starting conditions prevail with low open circuit voltage ie < 35 V, low current ie < 20A and long arc gap.
Castner (2) reported that a 2% ceria electrode offered the best performance but Matsuda (3) found that at low open circuit voltages ceria was inferior to lanthana, yttria and thoria. Specific work on multi-dopant electrodes concluded that some offered marked improvements in overall performance (4 and 5), with MultiStrike® electrodes achieving 10 times longer life than a thoriated tungsten under the same conditions.
There is little to choose between the effect of various doped electrodes on arc starting but none of them is any worse overall than pure tungsten. Under certain defined conditions lanthana and ceria offer significant advantages, while the multivariates offer considerable arc striking advantages. 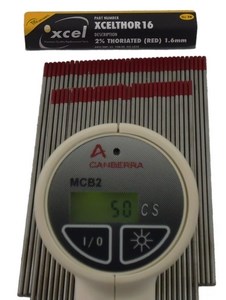 Figure 1. Comparison of radiation output from thoriated (up) and multivariate (below) electrodes. Whilst the thoriated output is below the recommended threshold (Ref 10) any radiation should be considered harmful and avoidance is the best solution. This reinforces the generally held belief that thoriated electrodes should be banned. 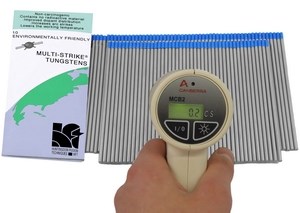 A stable arc is a prerequisite for producing welds of consistently high quality. Stability is inversely related to the electrode material work function so that although tungsten is good, additions of dopants with their lower work functions increases arc stability. There is evidence (2) that some dopant materials are lost from the electrode surface however and may or may not be adequately replenished by diffusion from the body of the electrode.
This would have the net effect of progressively reducing arc stability during use. Some multivariate electrodes provide a higher percentage of dopant to counter this effect.

As with arc starting, erosion is influenced by many related variables; even sophisticated research must therefore lead to conclusions based on limited combinations of circumstances.
A major contributory factor is contamination through touch starting and contact with the weld pool. Other factors are electrode tip geometry, welding current, open circuit voltage, shielding gas, parent material and welding power source.
Winson & Turk (6) reported that thoriadoped electrodes exhibited longer life than pure tungsten in most applications. Matsuda (3) found that dopant additions offered significant advantages at higher welding currents. 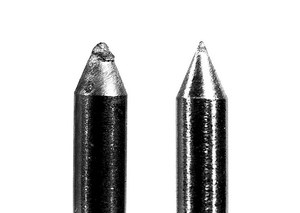 Health warnings are issued (7 to 9) by many legislative and advisory bodies in connection with the use of welding electrodes which contain refractory oxides and in particular thoria (Figure 1).The warnings refer to the potential toxicity and in particular to the risk of inhalation of dust particles from thoria-containing electrodes generated during grinding. Whilst the use of thoria doped electrodes has not yet been banned there is a duty of care responsibility on the suppliers and users of these products to take precautions during storage and use.

In all cases a dedicated storage arrangement is advised. With low-volume users this could be a simple metal cabinet, but for largescale users a separate room may be more suitable. In either case the cabinet/room walls will probably be adequate to provide effective shielding against harmful effects (7). 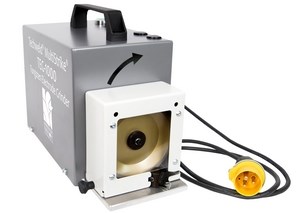 Figure 3. The HFT TEG-1000 dedicated electrode grinder is representative of the sophisticated machinery currently available. Offering a wide range of options on tip geometry the machine is capable of producing a consistently high degree of finish with a minimum of operator skill and in total safety. The standard HFT grinder will accommodate up to 4 mm electrodes but accessories are available to increase this to 6.4 mm.

Electrode grinding creates a major health hazard by virtue of the dust generated. In the case of thoriated products any dust released may be ingested and give rise to toxic poisoning. There are a number of reasons why using a dedicated grinding machine to prepare tungsten electrodes offers attractive benefits. It may be because of the control that can be exercised over point geometry and consistency. It may be due to the fact that it eliminates cross-contamination from a grinding wheel, which has been used for other purposes. Or it may be since radiotoxic hazards associated with carcinogenic dust can be eliminated.
Grindstones with local dust extraction in combination with a simple filter mask should be used unless the number of electrodes involved is very small (less than about 20 per year). If the grinding wheel is not fitted with a protective viewing screen, eye protection should be worn. The air extract from the grindstone should be arranged so that the particles are deposited into a substantial disposable bag.
In addition to these precautions a safe method of collecting and handling the dust from the collection unit is preferable to minimise release to the atmosphere (simple sealing in a paper/ plastic bag is adequate.) The area around the grinding wheels should be cleaned daily with a vacuum cleaner to remove dust particles. If a high efficiency vacuum cleaner is not available, then the material should be damped down to minimise dust.
Commercially available grinding equipment designed specifically for welding electrode preparation are available such as that shown in Figure 2.

With respect to arc starting, all oxidedoped electrodes perform better than pure tungsten electrodes. Under certain defined conditions lanthana and ceria offer significant advantages. Addition of any refractory oxide dopant to tungsten electrodes improves arc stability but ceria or ceria-containing multi doped tungsten is most effective. Dopant additions of all types reduce electrode erosion under some circumstances but no single dopant is superior to the others under all welding conditions.
Electrode quality and traceability can be an important consideration. Traceable tungstens should be used by companies with critical welds and operating to ISO standards or similar. The use of thoria-doped electrodes constitutes a health risk and alternative oxide doped electrodes should be employed. The uncontested evidence on radioactivity and the consequent radiotoxic hazards strongly suggests that thoriacontaining electrodes should be banned.