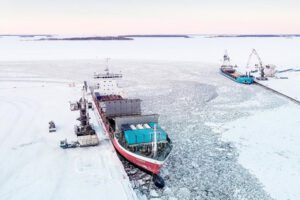 Outokumpu has agreed with Langh Ship to replace the current three cargo vessels with new ships. The ships transport coils from its mill in Tornio, Finland to its European hub in Terneuzen, the Netherlands, and return to Tornio loaded with recycled steel, its main raw material. The first new ship will be taken into use in 2023.

The new vessels by Langh Ship are designed to meet Outokumpu’s ambitious sustainability targets in minimizing emissions and to comply with upcoming environmental regulation. The design has been developed in close cooperation between Outokumpu and Langh Ship.

Outokumpu’s long-term climate target is to reduce its direct and indirect CO2 emissions as well as those of its supply chain to reach carbon neutrality by 2050. Outokumpu has this year committed to a more stringent climate target by the Science Based Targets initiative to keep the global warming below 1.5 degrees. To this end, Outokumpu will further reduce its CO2 emissions by 2030, approximately by 30% compared to 2020.