Global demand for natural gas will continue to grow. Between now and 2035, this demand is expected to increase with an average of 2 % per annum. Along with this rising demand, LNG production will increase too, mainly for markets in the Middle East and Asia. The question is: will it be sufficient?

These are some of the key points in Shell’s LNG Outlook for 2018. According to Shell, natural gas is, in terms of environmental impact, a cleaner option than coal or oil. Therefore many governments have employed policies aimed to stimulate the exploitation and subsequent use of gas reserves and to discourage the use of coal.
For example, China has targeted 350 to 380 billion cubic metres of gas demand by 2020. In South Korea, the 8th Basic Plan for Energy prioritises renewables and gas, while not sanctioning new nuclear and coal. The first signs of the rise of natural gas are already visible. In 2016, gas overtook coal as the second largest source of power generation within the OECD-countries.

Shell expects that gas will make up over 40% of energy demand growth over the next two decades. While gas will continue to be used to generate power, the company identifies significant demand growth from sectors that are more difficult to electrify, such as the production of steel and cement, especially in Asia and the Middle East. This has implications for LNG production as the possibilities for gas transport are limited in these areas.
These infrastructures are in place for domestic gas production in North America and parts of Europe but not to the same extent in Asia and the Middle East. Given the rising demand for natural gas, especially in these territories, LNG demand is expected to grow faster than natural gas, with an average of 4 % up until 2035.

Already the global liquefied natural gas (LNG) market has been buoyant, with demand growing by 29 million tonnes to 293 million tonnes in 2017. Japan, for the time being, is the world’s largest LNG importer in 2017, while China moved into second place as Chinese imports surged past South Korea’s. Total demand for LNG in China reached 38 million tonnes, a result of continued economic growth and policies to stimulate gas and to phase out coal.
“We are still seeing significant demand from traditional importers in Asia and Europe, but we are also seeing LNG provide flexible, reliable and cleaner energy supply for other countries around the world,” says Maarten Wetselaar, Integrated Gas and New Energies Director at Shell. “In Asia alone, demand rose by 17 million tonnes. That’s nearly as much as Indonesia, the world’s fifth-largest LNG exporter, produced in 2017.”

In the last decade the supply demand dynamics of LNG have changed considerably. The number of countries supplying LNG stands at 19, up from 12 at the start of the century. Major LNG exporters are the USA and Australia. Several African countries have increased LNG output from existing facilities. Several large scale LNG projects in Africa, for example in Mozambique, are planned to generate LNG in the beginning of the next decade.
New project development will be necessary to have an adequate response to the expected rise in demand, Shell states. Based on current demand projections, the company sees potential for a supply shortage developing in mid-2020s, unless new LNG production project commitments are made soon.
The latter has been quite an issue as low gas prices have halted new project development, for example with the aforementioned project off the coast of Mozambique. For this particular project, it looks like all lights are green.

Another issue which has impacted new project development is the tendency for LNG buyers to sign shorter and smaller contracts. In 2017, the number of LNG spot cargoes sold reached 1,100 for the first time, equivalent to three cargoes delivered every day.
Whereas buyers want flexible, short term, low volume contracts in order to compete in their downstream power and gas markets, most suppliers still seek long-term LNG sales to secure financing. According to Shell, this mismatch needs to be resolved to enable LNG project developers to make final investment decisions that are needed to ensure there is enough future supply of this cleaner-burning fuel for the world economy. 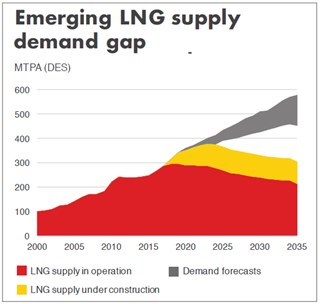 A supply demand gap of 275 million tonnes of LNG
is lurking if upstream investments are not realized.
Image courtesy of Shell.

A growing world population, economic growth and urbanisation will lead to a higher global demand – 30 % more – for energy between 2015 and 2040. Responsible for this demand growth are mainly emerging economies in (South East) Asia, the Middle East and Africa. At the moment, the global energy mix is responsible for two-thirds of global greenhouse gas emissions, and has a significant impact on air quality, particularly in densely populated urban areas, for example in China.
From the UN’s sustainable development goals and the Paris Agreement on climate change emerged a global ambition to cut greenhouse gas emissions and improve air quality, while providing energy to everyone. This will require a transformation of transition from energy production towards sources that have less impact on climate change and air quality, such as renewable energy (solar, hydro, biomass etc.) or a shift within fossil feed stocks (mainly from coal to natural gas).
As Shell puts it: “Natural gas is helping to provide more and cleaner energy around the world. Gas emits between 45% and 55% lower greenhouse gas emissions than coal when used to generate electricity. Compared to coal plants, modern natural gas-fired power plants also emit less than one tenth of the pollutants. It is one of the few energy sources that can be used to generate power, provide heat for both homes and essential industrial processes and fuel the transport of people and goods.”