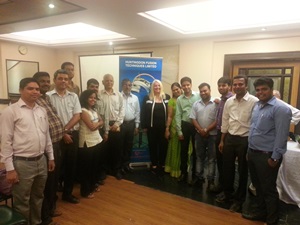 During the week she led two Lectures on the topic of Welding Purging. The first at the Institute of Engineering in Madras (Chennai) to 34 attendees. The second to The Welding Institute of Bombay where about 50 delegates attended and heard explanations as to why we purge, what metals require purging and how to do it effectively in order to produce bright, shiny, oxide free welds.
Both sessions interacted with the audience and the attendees were able to get ‘hands-on’ with the products.

Lively question and answer sessions followed each talk that continued into the evening at Mumbai when we were served an informal supper at The Golf Club.