In past years, the wholly owned subsidiary of Chevron, Chevron Shipping, undertook the largest shipbuilding and fleet modernization program in their history. Part of that 13-vessel shipbuilding program entailed the design, construction, and delivery of six LNG vessels by Samsung Heavy Industries in South Korea. Chevron began accepting delivery of their state-of-the-art LNG carriers in 2013, and the last ship, the Asia Excellence, was delivered in 2017.

These ships rely on the latest developments in containment tank technology to address and correct a persistent problem in LNG: boiloff gas. 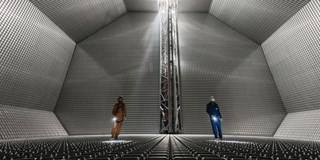 The interior of a Mark III containment tank. Photo: GTT

The Mark III tank is, at its outermost layer, made up of a “cryogenic liner directly supported by the ship’s inner hull. The liner is composed of a primary metallic membrane positioned on top of a prefabricated insulation panel,” according to GTT’s website. “This primary membrane is made of corrugated stainless steel 304 L, 1.2mm thick. It contains the LNG cargo and is directly supported by and fixed to the insulation system. This membrane is folded to create corrugations.” Resting on top of the primary membrane is another, secondary membrane made of Triplex, a composite laminated material. This Triplex layer consists of a thin sheet of aluminum between two layers of glass cloth and resin. It is positioned between the prefabricated insulation panels.

This design—with its highly effective insulation layering—allows the Mark III containment tanks in Chevron’s ships to prevent their 40,000 cubic meters of LNG from rising in temperature, evaporating, and producing boiloff gas. According to a company document, the “improved insulation performance” of the Mark III has reduced the daily boiloff rate of LNG cargo ships by as much as one third. 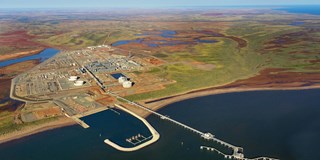 The Wheatstone project off Australia’s west coast is a focus of Chevron’s LNG operations. Photo: Chevron

Chevron has won several new LNG contracts and increased its activity in previously held markets across the world’s oceans since they began their shipbuilding program. In February 2019, Chevron signed a sales and purchase agreement (SPA) with South Korean oil refiner GS Caltex Corporation. The long-term agreement, which is for delivery of LNG to South Korea from Chevron’s global supply portfolio, will start in October of this year. “We’re proud of our partnership with GS Caltex and we welcome this opportunity to build on that relationship by supplying LNG to South Korea’s growing market,” said Hugh Connett, Chevron’s president of Global Gas.

At the same time, Chevron has accelerated the Australian Wheatstone Project, (see image above) with first gas delivery from Wheatstone taking place in March 2019. This project combines an offshore and onshore LNG hub located at the Ashburton North Strategic Industrial Area, 12 km west of Onslow in Western Australia. The project includes two LNG trains with a combined capacity of 8.9 million metric tons per annum and a domestic gas plant.

Chevron’s expanding LNG fleet follows an increase in the global demand
for natural gas. According to a report by the International Gas Union,
“this significant growth can largely be attributed to increases in new
LNG supply, driven primarily by projects in Australia and the United
States bringing new capacity on line. The Asia-Pacific region continues
to be a core driver in global demand, which can be attributed to the
strong enforcement of coal-to-gas switching policies through China, as
policymakers aim to improve urban air quality across the country. Other
countries driving global LNG growth include South Korea, Pakistan, and
Turkey.”

A report by LNG World News indicates that in response to growing demand,
more LNG carriers are entering service than ever before. Specifically,
22 LNG vessels worth USD 3.9 billion were delivered in 2018, with
another 43 LNG vessels scheduled for delivery by the end of that year.
Total projected capacity of the LNG fleet set for delivery in 2018
amounted to 10.23 million cubic meters alone, by far the largest yearly
number ever. This, combined with the total capacity of the globally
operating LNG fleet, amounts to 75.6 million cubic meters of cargo
capacity.

The LNG World News report also indicates that Japan-flagged LNG carriers
dominate the oceans, with a total of 87 vessels in service. “Japan is
followed by Greece’s 60 ships and Qatar’s 59 vessels. Capacity-wise,
Qatar has the biggest stake in the LNG shipping market, with 12.2
million cubic meters. They are followed by Japan, with 11.9 million
cubic meters, and Greece, with 9.6 million cubic meters.”