On the 30th of September, John Rowe will be leaving the offices of the International Stainless Steel Forum for the last time, having handed over the role of Secretary General to Tim Collins. In a joint interview, SSWN asked John and Tim to outline the role of the Secretary General and to touch on the challenges facing the stainless industry.

If (as this editor initially imaged) you thought that the role of the Secretary General at the International Stainless Steel Forum (ISSF) was purely symbolic, then think again. The position has very little to do with cutting ribbons and delivering speeches full of platitudes. Quite the contrary. Together with a small staff, the Secretary General has to manage a host of issues that are best organized from a central position within the stainless steel sector. Commenting on this function, John says: “it is surely self-evident that if costs are to be incurred, then it is better to share the burden as a united group rather than to pick up bills as individual production facilities.”

The role of Secretary General has therefore traditionally been filled by an industry insider. An individual with extensive experience in the production of stainless steels and an understanding of the global market. It is pretty much mandatory to be a highly skilled orator, negotiator and also a good listener. Such talents are a pre-requisite to convince manufacturing companies to join the ISSF, to organize the necessary resources and to achieve results for the industry as a whole.

Picking up on how goals are set and realized, John explains that the ISSF has established four main committees. “Our basic committees cover economics and statistics, health safety and the environment, raw materials research, and finally market development for both flat products and long products. All the committees do sterling work which is highly valued but I would suggest that the most important role is for market development. That’s because today the biggest challenge facing our industry is the huge overhang of excess capacity and the only way you can realistically eat away at that is to boost demand.”

Tim concurs with John’s viewpoint, adding that he sees education as a concomitant issue for the ISSF. “In my experience stainless steels are not fully understood by many of the potential customers and specifiers, let alone the public at large. This is another area for work which sits comfortably alongside market development. I’m therefore delighted to say that the ISSF has a strong history of providing solid and reliable information to a wide range of Interested parties.”

Born in the UK, John spent practically his entire childhood in Rhodesia (now Zimbabwe). After training as a lawyer in both Grahamstown and London he started his career as a partner in a firm of solicitors in Rhodesia. John then branched out into industry in 1979, notably joining Columbus Stainless where he was responsible for both domestic and global sales and marketing. In 2002 he was approached by Thyssen Krupp to join their company and eventually became the CEO of Shanghai Krupp Stainless. He assumed the role of Secretary General of the ISSF in 2012.

On his education John comments: “being a lawyer provides you with a very good foundation in thinking forensically as well as in effective oral and written communication skills. These will always come in handy whether you are going to practise law or enter into industry.”

As an aside, John also took part in the very first meeting organized to discuss the foundation of the ISSF, back in 1995 and has attended all except two meetings since then. 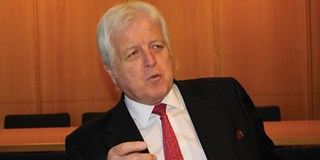 As an organisation the ISSF could rightly be described ‘mean and lean’, punching well above its weight with a compact staff and a modest budget. John therefore pays tribute to the people he works with, and especially the many fellows that have spent time at the ISSF. “Without doubt a highlight of my time here has been the opportunity to work with our fellows, or interns. Altogether we have had over fifty such young people, all well-educated and highly motivated individuals with a strong work ethic. It is a pleasure to teach them about the functions of the ISSF. Moreover, as they come from varied backgrounds we benefit from a closer understanding of the many projects their companies are running.”

Despite its size the ISSF represents the greater majority of all the stainless steel producers. Depending on your definition, that number could well be 90%. “Many of the stainless steel mills are what we term direct members. However, in some countries producers channel their membership through the national stainless steel councils and do not pay individual contributions,” explains John.

Asked about the remaining 10%, Tim notes that the ISSF encourages all qualifying companies to come on board. “We engage in open dialogue with the few companies who are not yet members, as well as any new stainless entities which do emerge from time to time. At the ISSF we do our utmost to represent the entire sector, meaning both the producers as well as the local development associations. These bodies make a positive contribution as local advocates in their specific market areas so working together is the best way to present the strongest possible case.”

Tim Collins: “fully recyclable and with outstanding hygienic properties, there are a tremendous number of applications for stainless steels around the globe.”

Over the years the ISSF has identified many new opportunities for stainless steel and also undertaken research and development programmes. Discussing upcoming initiatives, Tim states the importance of identifying projects which will bring maximum benefit for ISSF members. He also emphasizes the ISSF’s ongoing educational programs which are constantly being updated. “We can achieve much here as many of the people who specify and procure stainless steels have only a very sketchy knowledge of this range of alloys. Moreover they don’t really understand the long-term benefits. Items made of stainless steels require very little maintenance so as life cycle costing becomes more of an issue this is an important feature we really need to educate people about.”

Developing the educational theme, Tim indicates that the ISSF will also reach out to a much wider audience. “Using social media channels for example we can reach the public at large. Getting their attention is important as it can create a positive groundswell of opinion. Let me give a simple yet persuasive example: the use of stainless steel beverage mugs at music festivals. By providing a mug which is not just functional and recyclable but also aesthetically pleasing and has a commemorative value as well then we can get people on board who will spread the environmental message further.”

Upon graduating in metallurgy from the University of Sheffield, UK, Tim joined the graduate program of British Steel Stainless where, thanks to various internships, he discovered a deep interest in production metallurgy. Subsequent mergers with Avesta and later Outokumpu brought opportunities for Tim to work in areas such as strategy development, supply chain management, sales & marketing and transportation. Along the way he gained extensive knowledge of various product forms including hot rolled plates and long products.

During his career Tim found the time to gain a post-graduate diploma in production and inventory management as well as a master’s degree in business administration at Warwick University, UK.

Having lived in Sweden, the Netherlands and now Belgium, Tim says he has come to appreciate the balance of the continental lifestyle. 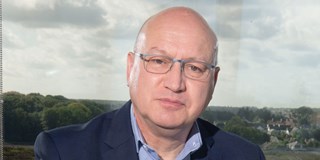 A passion for stainless

As stated, on the 30th of September John will step down as Secretary General in favour of Tim. To ensure a seamless hand-over, both gentlemen have spent the past couple of months working closely together. Comments Tim: “All my predecessors have done excellent jobs, firstly in setting up the ISSF and then in motivating and supporting the entire industry. I will be doing my utmost to fill John’s shoes. This is an exciting time for our industry, with current growth running at between 5 and 10 per cent and new applications being found all the time.”

John may be saying goodbye to the ISSF but he is certainly not leaving the industry. Relocating to Sheffield in the UK, he will assume the role of Managing Director at the British Stainless Steel Association, starting on the first of October. As is his nature, John will invariably focus all of his considerable energies and enthusiasm on this new task. “I have been involved with stainless steels for some forty years and working with this industry is a real passion for me. Fortunately my wife continues to be very supportive as we both know that I can never do things by halves. If you are a Secretary General or a managing director you cannot work part-time. Indeed my motto was, is and always will be to get stuck in and do the very best you can. I am quietly proud of achievements during the past seven years and am quite sure that Tim will be driving the ISSF to even greater heights.”

As observers have stated, one of the challenges facing the stainless steel sector is excess capacity. Commenting on this, John notes that an imbalance in any market is an unhealthy situation which, by whatever mechanism, needs readjusting. “The challenge here is the length of time needed to return to a more normal state of affairs. However, what I find encouraging is that this is only a potential threat rather than an existent one because the excess capacity is being very well managed. Most of the producers with excess capacity are operating at well below their potential melting capacity. This is all down to economics: having fought for years and years to gain market share companies have finally realized that they have simply been burning money.”
Stainless Steel World Newsletter