Whether it’s a high-end department store in Canada, lavish palaces in the Middle East, or a grand variety of commercial, industrial and residential structures in the Netherlands, India, Hong Kong or the United States, architectural titanium is well established as a showcase application on the global stage. For over 20 years, the company, aptly named Architectural Titanium, based in Lawrence, KS, has served as a consultant to help usher titanium onto that stage.

Gary Nemchock, the president and founder of Architectural Titanium, is a familiar face as a guest speaker at many conferences organized by the International Titanium Association. As outlined on its website (www. architecturaltitanium.com), the company’s mission involves offering “a full range of products and valueadded services specifically designed for architectural applications. Advanced processes and cutting-edge technologies are utilized to provide architects, designers and artists with distinctive design solutions.” 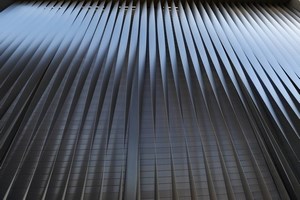 Each vertical titanium blade is torqued to a
specific point and locked in place with steel bolts
into a steel exterior frame.

The company unveiled details of a recently completed project that represents the range of capabilities and properties of titanium as an architectural material of choice. Vicki Eudaly, vice president of Architectural Titanium, outlined specifics of large, exterior titanium “blades” that create a striking aesthetic design statement for the façade of La Maison Simons, a venerable fashion store located in Alberta British Columbia, Canada.

Eudaly said LeMay Michaud of Quebec, the building’s architect, created a cascading series of torqued blades made of commercially pure (CP) titanium Grade 2. Uniti Titanium LLC, Corapolis, PA, supplied the torqued blades, 343 in all, at a thickness of 1.5 mm (0.060 inches), ranging in length from 16 to 41 feet and weighing in at 14,000 pounds. Eudaly said the blades have a G1 roller-embossed matte finish. Leder Steel Ltd., Acheson, Alberta Columbia, Canada, did the installation and even built custom-designed crates to ship the titanium blades. She explained that each vertical blade is torqued to a specific point and locked in place with steel bolts into a steel exterior frame.

Moving along the building, the blades catch the changing sunlight and create the distinctive appearance of movement. “The titanium seems to completely change color depending on the light sunrise reflection makes it appear golden,” Eudaly said. “The visual effect produced is a dance of light and shadow that recalls the natural phenomenon known as the Aurora Borealis. The subtle reflectivity of the titanium produces a variety of spectral colors as the lighting conditions change.

The blades cover all three sides of the department store, located at the end of a shopping mall.” She said that the owner of the fashion department store visited the iconic, titanium clad Guggenheim Museum in Bilbao, Spain, designed by Frank Gehry, which opened in October 1997. As a result, Mr. Simons so loved the look of titanium on the museum that he used the metal for stores.

Interviewed three years ago, Nemchock estimated the current global market for architectural titanium is 500 tons. However, Eudaly pointed out that the architectural titanium market is subject to the vicissitudes of international economic trends. Building contracts that specify the use of titanium typically require long lead times and involve numerous design changes. She did say that the draw for using titanium for structures is almost equally divided between exploiting the metal’s aesthetic characteristics and its physical/mechanical attributes of low maintenance and corrosion resistance.

As an example of this range, Eudaly said the company currently is involved in the aesthetic application of architectural titanium for the buildings of Spiritual University, Punjab, India, and Sun Plaza Shopping Center in Jakarta, Indonesia, as well as an industrial pumping station in the Netherlands, which manages the safe passage of fish populations.

In the United States, two noteworthy structures have incorporated architectural titanium. First is the Houston based headquarters of international shipping company Chipolbrok America Inc., designed by Ted Trout Architect and Associates Ltd. Completed in 2011, the four-story office building has a main entrance that features architectural titanium. Second is the Denver Art Museum, designed by Daniel Libeskind, which opened in 2006 and has over 230,000 square feet of titanium on its exterior surfaces.
Asia is home to many modern buildings and structures that feature the extensive use of architectural titanium. Recent examples, all competed in 2011, include Tokyo’s Haneda Airport D Runway Pier; the Hefei Lakeside International and Convention Center in China; and the Saemangeum Exhibition Center in Korea. 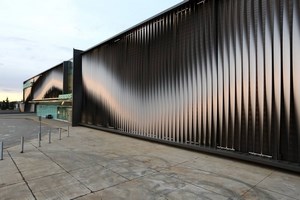 The blades change color depending on the light
and create the distinctive appearance of movement
as the viewer passes by.

Since it was established in 1997, Eudaly said Architectural Titanium has promoted the use of titanium for diverse architectural applications including exterior cladding, curtain walls, roof cladding, column covers, soffits, fascia, canopies, interior cladding, light fixtures as well as art, sculpture and monuments. According to company  literature, titanium provides a “combination of corrosion resistance, strength, light weight, and durability gives it the longest life span of any metal, under any conditions, with minimal maintenance.
Its unique reflectivity is unmatched by any other metal. And with innovative designs that exploit its attributes, titanium is highly practical, especially when life cycle issues are considered.” The metal offers the ability to create a spectrum of colors, reflectivity and textures through anodizing and industrial finishing techniques. Titanium offers a low coefficient of thermal expansion (similar to glass and concrete), is environmentally friendly (will not erode, corrode or leach metal ions), and has a life cycle warranted for 100 years against through-wall corrosion.
Eudaly also underlined the company’s signature product line: Crystal Titanium®. As described on the Architectural Titanium website, Crystal Titanium “is a proprietary custom metal, patented and manufactured by Architectural Titanium. Mill-finish titanium sheets or plates are secured in custom fixtures in a specialized furnace where the vacuum is equivalent to outer space. The furnace is gradually heated to near the (metal’s) melting temperature (around 3000° F). During this precision controlled cycle, the titanium’s natural crystal structure begins to enlarge and reorient. The crystals grow in a columnar pattern across the thickness of the titanium. A transition from hexagonal to cubic crystal alignment creates the uniquely faceted, specular orientation of crystal growth and size. The resulting visual aesthetic is unmatched by any other metal and is only available in titanium.” Architectural Titanium developed the closely guarded surface-treatment system.
New York-based Architectural Record magazine lauded Crystal Titanium as a “top pick” in its 2011 Innovated Product Review. Gary Nemchock’s journey into the realm of architectural titanium began in the late 1960s, when he was trained as a goldsmith designer in Copenhagen. Originally from Chicago, became a professor at the University of Kansas from 1971 to 1986. He became involved in the architectural metals industry in 1986 and became Architectural Titanium in 1997 when hired by TIMET as a consultant to develop the architecture market.