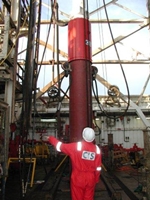 The contract requires CIS to provide conductor-driving and cold-cutting services for approximately 55 wells located offshore Qatar on behalf of a major operator in the region.

The three-year contract, which features two one-year options to renew, will be carried out by CIS personnel from its base of operations in Doha, Qatar. CIS will use state-of-the-art 90 kJ hydraulic hammers to drive the 20-inch conductors that will create part of the foundations of the new wells. To ensure that work proceeds as planned, CIS will supply a complete set of 90kJ hydraulic hammers, as well as a backup set and buffer set, in the event that two separate operations must be carried out simultaneously.