Thinking outside the box has produced the worlds´ first ever combined wind & hydro power plant. Located in Germany, it could provide an answer to the problem of how to even out the peaks and troughs of renewable power generation technologies while provided clean green energy.

The Naturstromspeicher Gaildorf is a natural energy storage plant combining a pumped storage hydro-electric power station with a wind farm. It uses the wind farms’ four towers and bases with a total capacity of 160,000 m3 as water reservoirs. It is – worldwide – the first plant of its kind.

The principle behind the operation is both simple and ingenious. If there is a surplus of power, the pumped storage power station switches to pumping mode moving water from a lower reservoir to the higher storage basin in the wind towers. If the demand for electricity in the grid rises, water is released from the upper basin to the bottom via a penstock and causes the pump turbines to move. Within seconds, electricity is generated and fed back into the electricity grid. 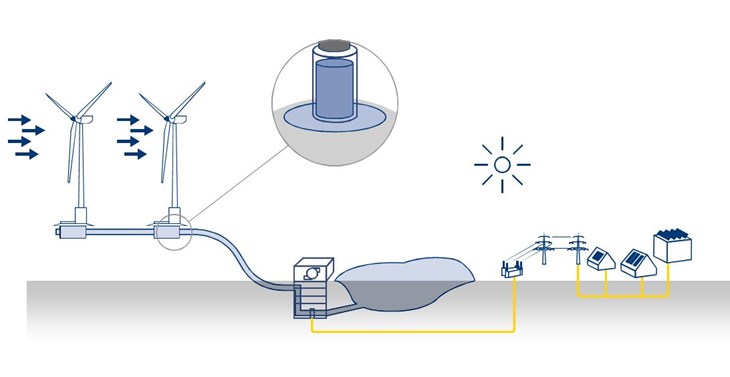 Voith, a 100% family owned company based in Germany, has been a strong partner in the project by contributing to the turbine development and adapting it to the special piping behaviour and the long penstock. In late September Voith signed a contract to deliver the pump turbines for this special project. The three reversible Francis machines with a total output of 16 MW will be a core element in the plant.
The project marks a major step forward in using renewable energy sources to balance power demand and supply fluctuations since the combined wind and hydro power plant will balance power for fast-response grid stabilization.
Both in industrial nations as well as in developing countries with a rising need for energy, production and consumption of electricity do not always run concurrently. There are daily fluctuations in the electricity grid. In the near future, power generation by wind and photovoltaic systems will be far above the load in case of strong wind or high solar radiation, and far below the load during an increase in demand hours. Pumped storage power plants are ideally suited worldwide in helping to even out these frequent changes between electricity shortages and surpluses which significantly prevent the curtailment of renewable energies. Modern systems need only thirty seconds to start up from a standstill and in the event of a black out, pumped storage power plants can support and control the complex grid restoration process due its unique black start ability. At present, they are the only available energy storage facilities that have undergone large-scale technical testing.