It is no exaggeration to say that the tank container has revolutionized freight transport. From its humble origins, the ISO tank container industry now numbers more than half a million units across the globe. Tank production is growing at nearly twice the rate of the world economy and they are almost always made of molybdenum-containing stainless steel. Such is their popularity that these containers now represent a significant end-use application for molybdenum. 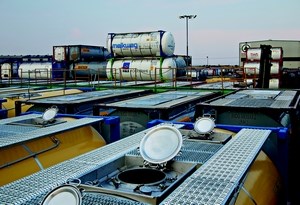 Tank containers use stainless steel for a variety
of applications besides the main tank, including
walkways, hatches and valves.
© IMOA/Nicole Kinsman
The first International Organization for Standardization (ISO) tank containers were manufactured in the late 1960s, with the ISOTANK name being registered by Andrews of Aintree Ltd, Liverpool, UK in 1969. These were also the first tanks to gain design approvals for international transport by Lloyds Register and the UK Department of Transport.
Today, tank containers are used to transport a wide range of cargoes including gases, powders, liquids and other hazardous and non-hazardous loads, as well as a wide range of perishable and non-perishable food and food-grade products including orange juice, wine and even liquid chocolate. They can be cooled or heated using thermal jackets, either to protect perishable goods or to turn viscous commodities like heavy fuel oil into a more liquid state for unloading. The majority of tank containers are constructed from stainless steel and are manufactured by a handful of global companies. One such company is Welfit Oddy, based in South Africa. In 2016, they manufactured 6,300 containers, some 14% of the global total.
Approximately 80% of the stainless steel used to manufacture the containers is Type 316 – containing 2% molybdenum – although other grades including 304 and lean duplex 2001 are also used. Stainless steel accounts for more than 60% of the weight of the container – 2.5 tonnes of the total empty weight of 4 tonnes. At least one manufacturer has started to produce the tank barrel from higher strength 2205 duplex stainless steel to make lighter packages with even better corrosion resistance.
A typical container has a capacity of 25,000 liters and a maximum gross weight of 34 tonnes. The tank is usually surrounded by a protective insulating layer of polyurethane and aluminium and is secured inside a rectangular steel frame made to ISO specifications, nearly 20 feet (6 meters) long, nearly 8 feet (2.5 meters) wide, and approximately 8 feet (2.5 meters) high. The ISO accreditation is important as it guarantees that the tank unit will seamlessly connect with an entire transport infrastructure by road, rail and sea, just as regular ISO containers do.

It is this intermodal capability which has proved such a catalyst for the growth of the container industry, as the goods remain in the same container throughout their journey, whatever the mode of transport. Roger Gloor is Technical Manager for Bertschi AG, a global logistics service provider. Sharing his insights of tank container transport and its growing impact on cargo movements, he said: “What we have seen in the past decade is a globalization of product flow. Products are increasingly sourced not just regionally or on the same continent, but globally, and containerization makes this easier, allowing us to ship cargo ‘door to door’, using the most appropriate method. This means we can plan better, reduce lead times, and fix costs much more competitively.” Container transport is as flexible as the infrastructure allows, and because of this, it is usually also the most sustainable, saving energy and resources. 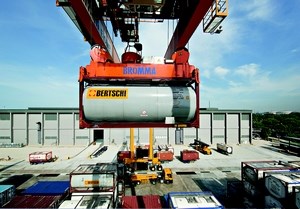 The tank containers can be stacked just as regular
20-foot ISO containers. © Bertschi

So why use molybdenum-containing Type 316 stainless steel? “Type 316 has several advantages,” said Roger. “It is easy to clean, provides excellent resistance against chemical corrosion and has good tensile strength. Because of its global availability, it’s also easy to source and repair anywhere in the world, and given its durability, it is competitively priced.
Chemicals are increasingly complex and present new corrosion challenges, but providing that the tanks are thoroughly cleaned and loaded correctly, there is no reason why containers shouldn’t give many years of reliable service.” Once the product has been delivered, the tank is cleaned according to the nature of its contents and is ready to be used again. There are many different cleaning processes depending on the cargo, and each process has a different application time, rangingfrom a few minutes to several days. These processes are an important factor in ensuring the quality and safety of transportation, and are regularly checked in accordance with international regulations.
The ease of cleaning stainless steel and its durability over repeated cycles is also an important logistical consideration. Historically, many commodities were transported in bulk by sea or in drums, which can be difficult to clean and are often disposed of after a single journey. In comparison, tank containers are rarely unused for any stage of a journey – including when they are initially delivered to their logistics customers. New containers built in South Africa typically leave laden with the country’s largest export – wine – in an elegantly efficient matching of one-way supply and demand.

Products are transported to and from every continent, with the flexibility of intermodal container transport helping to make previously unviable journeys possible. New rail routes have recently been opened up between China and Europe, taking advantage of the shorter distances and transit times over land compared to the sea route. Convoys of tank containers complete the 8,000 kilometer rail journey in just 18 days. The efficiency – and ultimately, sustainability – of tank containers are fuelling a boom in this sector which shows no sign of abating. In 2016 another 44,450 tanks were manufactured around the world, using more than 110,000 tonnes of stainless steel and nearly 1,800 tonnes of molybdenum, making tank containers a significant end-use application for molybdenum.
At the end of 2016, there were some 508,000 containers in existence around the world, an increase of 8.5% over the previous year. This popularity is due in part to the durability of the containers and their resistance to corrosion. Despite a variety of corrosive cargo, endless movement and vigorous cleaning, the containers are used over and over again, thanks to molybdenumcontaining stainless steel.

International Molybdenum Association (IMOA) was founded in 1989 and is registered under Belgian law as a non-profit trade association (ASBL) with scientific purposes. IMOA currently represents some 85% of mine production and almost all conversion capacity outside China, as well as some mining and conversion capacity within China.
This article was originally published in the IMOA’s MolyReview, 1/2018 and is reprinted with kind permission.