Two-strand continuous slab casters from Primetals Technologies went into operation in September at Baosteel Zhanjiang, a subsidiary company of the Chinese corporation Baoshan Iron and Steel Co Ltd. (Baosteel). The machines are part of a new Baosteel production site in Guangdong Province in South China. They have a total annual capacity of five million metric tons of high-quality, high-strength steel grades. 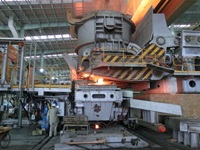 The two continuous slab casters from Primetals Technologies are part of Baosteel’s new production complex that has been constructed in Zhanjiang, a port city in Guangdong Province. After the first phase of construction, the production complex in Zhanjiang has an annual capacity of around 7.8 million metric tons of steel, which is produced in three 350 metric ton BOF converters, and treated in RH plants and ladle furnaces. The two continuous slab casters from Primetals Technologies process five million metric tons of the total output. The cast slabs are produced for further processing in the 2,250 millimeter hot rolling mill. The other 2.8 million metric tons of liquid steel will be cast in a casting plant that Baosteel will transfer to Zhanjiang from its Luojing plant.