Siemens VAI Metals Technologies has won an order from Viraj Profiles Limited to supply an argon oxygen decarburization converter for its plant in Tarapur, Maharashtra. The new converter will allow the company to increase the stainless steel output required for its rolling mills. The project is scheduled for completion by mid 2011. Currently, Viraj Profiles is implementing a large scale program to expand its production capacities. As part of this program Siemens VAI has received an order to supply a rolling mill for stainless steel bar and light sections. The new AOD converter will have a capacity of 245,000tns of liquid steel per year, allowing Viraj Profiles Limited to significantly increase both the volume and efficiency of stainless steel billet and bloom production in Tarapur. This will allow the company to supply the majority of the new and existing rolling mills with billets from its own production. As per the contract, Siemens VAI will be responsible for the engineering of the AOD converter, which will have a tapping weight of 55tns. The company will also provide core components, including the trunnion ring, tilting drive, valve station, rotating inlet, injection nozzles, top lance and a combined lance and extraction hood carriage. The plant features a suspension system and a traversing extraction hood and top lance, in addition to individual nozzle control. The contract includes the Level 2 automation system for the converter tilt drive, the blowing lance and the bottom blowing system. Siemens VAI will also supply the process automation, including the Simetal AOD optimization system and the steel expert process models. 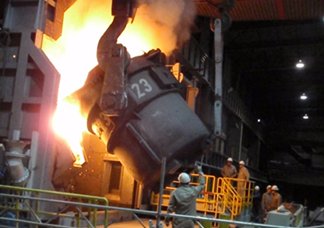