On the border between France and Switzerland, at CERN, physicists are working hard to understand the fundamental laws of nature. To succeed, they are using accelerators where particles are set to collide at the speed of light.

Aerial view of CERN taken in 2008 showing the circumference of the project. The collider is contained in a circular tunnel, with a circumference of 26.7 kilometres, at a depth ranging from 50 to 175 metres underground. Photo ©CERN

The collision occurs inside four huge detectors where the total energy at the collision point is equal to 13 TeV*. In the upgrade of the Large Hadron Collider (LHC), called HiLumi, or HL-LHC Project, Sandvik material will be used to keep the particle beam in position in the accelerators. This is where the magnetic and physical properties at four degrees Kelvin (approximately -269 degrees Celsius) are of great importance.
“Sandvik is developing a new advanced stainless steel grade and will thereafter deliver 475 tons to CERN. This is a prestigious order that really shows the value of Sandvik’s material expertise”, says Björn Mogard, Global Product Manager for cold-rolled precision strip material at Sandvik.

When the discussions first started over a year ago, the sales team ensured setting up the right connections within the company as the project required support from multiple departments. “It appeared a bit challenging to respond to the technical, commercial and legal requirements in the beginning, but at the end we managed to offer an attractive total package and we’re proud to realize the project”, commented Reto Stalder. The first material will be delivered to CERN by the end of this year. 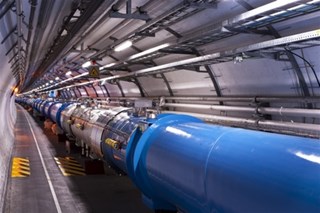 A section of the Large Hydron Collider

The Large Hadron Collider (LHC) at CERN at the Franco-Swiss border near Geneva, is the largest scientific instrument ever designed and built for scientific research. It has been exploring the new highenergy frontier since 2010, attracting a global user-community of more than 7,000 scientists spanning more than 60 countries.
After only a little more than one year of operation, on 4th July 2012 the LHC experiments, ATLAS and CMS, could announce the first major discovery: the long-sought Higgs boson, the cornerstone of the Standard Model (SM) of particle physics. This announcement, heralded by scientists as well as by the media as a giant leap in the understanding of our world and the origin of universe.
In order to further increase its discovery potential beyond 2020, LHC would eventually need an upgrade to increase the total number of collisions by a factor of 10. A more powerful LHC would provide more accurate measurements of new particles and enable observation of rare processes that occur below the current sensitivity level. This would make it possible to detect rare events not previously witnessed, and increase our understanding of the energy frontier. How this should be done is at the heart of the High Luminosity LHC project, of which the first phase has been supported in part by funding from the Seventh Framework Programme (FP7) of the European Commission, the HiLumi LHC Design Study.
With the upgrade, the LHC will push the limits of human knowledge, enabling physicists to go beyond the Standard Model and its Higgs boson: for example the mysterious dark matter and the world of supersymmetry are just among the longawaited mysteries that the LHC will unveil.
Stainless Steel World Newsletter