LNG powered ships – from tankers to cruise ships to passenger ferries – are rapidly gaining popularity around the world, not least for the environmental benefits that this cleaner technology offers. Technological innovations are playing an important role with one of the market leaders, Wärtsilä, driving ahead the trend for LNG in the maritime sector.

^ Delivered in 2013, Viking Grace was the first passenger ferry of its size to run on LNG, with a capacity of 2800 passengers. Compared to present-day fuels, nitrogen and particulate emissions are reduced by 85% and greenhouse gases by 15%. Wärtsilä delivered the propulsion machinery to this vessel. Photo © Wartsila 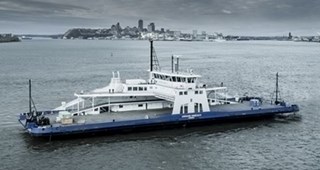 The MV Armand Imbeau II is the first LNG fueled ferry ever built in
North America. Photo © Davie Shipyards
Wärtsilä realised at an early stage that more than just a dual-fuel engine and a stand-alone LNG system was needed to gain global acceptance of LNG fuel for shipping. This led to the development of an innovative technology known as LNGPac to provide a complete fuel handling system.
One of the newest vessels to utilize this technology is a 92m long ferry built for the Canadian operator Société des traversiers du Québec (STQ), which underwent final commissioning at the Chantier Davie Canada shipyard in June 2018. The MV Armand-Imbeau II (pictured right) operates with a fully integrated system comprising dualfuel engines, fuel storage, control and supply system. By operating the vessel on clean burning LNG fuel, STQ will minimize the environmental impact of its operations.

This is in line with the Québec’s Maritime Strategy, which seeks to protect the integrity of the province’s river and marine ecosystem. The STQ was the first ferry operator in Canada to welcome a LNG fueled ferry. Its first was the MV F.-A.-Gauthier which was built in Italy in 2015 and utilized Wärtsilä’s dual-fuel engines and LNGPac system. The MV Armand- Imbeau II is the second ferry for the company and a third LNG ferry is on order.

The delivery of the MV Armand-Imbeau II marks a shipbuilding milestone as it is the first LNG fueled ferry ever built in North America. The ferry will operate on the Saguenay river on the Tadoussac–Baie-Sainte-Catherine route. It is capable of carrying more than 430 passengers and 110 cars or 16 tractor units.

Product Owner of Wärtsilä LNGPac, Mr. Rasmus Nybo was happy to provide Stainless Steel World with information about the specific materials used in the systems it build for LNG powered ferries.
“The materials used in LNG fuel gas supply systems are highly regulated by IMO and subsequently the classification societies,” Mr. Rasmus Nybo began. “Table 1 shows information extracted from the IGF code, listing the accepted steel grades for LNG fuel tanks. The most commonly used steel for vacuum insulated double shell tanks is stainless steel grade 304, which is accepted by most class societies.”
In some cases Class does not allow grades 304 and 316 in welded constructions, which limits the options to 304L and 316L. There are also other steel grades suitable for cryogenic service which are not mentioned in the current rules. High manganese steel, for example, is under investigation to be included in a future edition of the IGF code. Unlisted steel grades, however, may require rigorous approval processes with Class, IMO and flag state administrations. Depending on safety philosophy and tank design, the outer shell of the vacuum insulated tank can be made in either stainless steel or carbon steel.
Piping materials also follow the same requirements, where stainless steel grade 304 is most common. Grade 316L is preferred when above deck and exposed to weather and salt water.

When asked if corrosion is an issue within the LNG systems, Mr. Rasmus Nybo replied: “Problems with corrosion are next to non-existent with these tanks and steel grades, as the LNG for marine fuel is very clean. However piping and tanks on deck needs to be properly protected with marine painting to withstand the salty atmosphere (Table 2).”
“For larger tank sizes it is more cost effective to use single shell design with polyurethane insulation. The common tank material is then 9% nickel steel, which is much more prone to corrosion. Insulation covers the outside of the tank and protects against weather and water. However, the inside of the tank should be kept moisture free as far as possible during maintenance procedures throughout the lifetime of the tank.”

LNG as a viable fuel

First introduced in 2009, the Wärtsilä LNGPac system has played an important role in establishing the viability of LNG as a marine fuel. The system comprises a bunkering station, the LNG fuel tank and related process equipment, as well as the control and monitoring system. The LNGPac fuel system can be offered as a standalone product, or as part of a complete propulsion system. 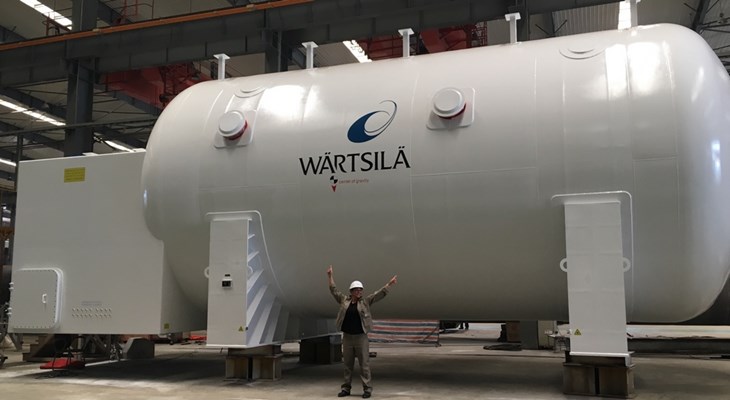