Kanto Steel signed off on performance savings for the supply and purchase of an EFSOP® Holistic Optimization System commissioned in the spring 2014. The EFSOP system was installed at the EAF#1 ‘Top Charged’ 90t furnace at the Kanto steel plant located at Tsuchiura-city, Ibaraki, Japan.

Consumption savings attained during the project lifecycle included 0.5% electrical, 8% oxygen and 20% kerosene, combined with an increase in yield of 0.5%. Total overall consumption savings reached were a little more than EUR 1.29/t 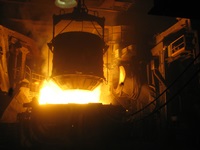 Kanto Steel is the third EFSOP system currently operational in Japan and the fourth order within the last 24 months.