Demand for nickel across the whole range of applications has increased by around 5% per year since 2010 and this trend looks set to continue. At the same time a shortfall in production has developed. Given the declining ore quality, falling mining output and growing demand, shouldn’t we be focusing on recycling more nickel?

Perhaps some of my friends might think me a little sad, but I’m imagining the readers of Stainless Steel World are by and large kindred spirits. You see, although I am certainly no expert in the field of archeo-metallurgy, I have to confess that as a metallurgist I have always been fascinated by just how closely the history of mankind seems to be linked to advances in metal working (stick with me on this one).

The first evidence of metal working in Europe dates from around 5500 BC with the extraction of copper, lead and precious metals and this was followed by the working of bronze from around 4000 BC, both of which seem to mark key points in the emergence of modern civilisation more generally. The growing use of new techniques to extract iron from its ores in around 1200 BC then marked the transition to the iron age, a period of time that only came to an official end in around 600 BC as pre-history transitioned to history with the widespread use of writing.

Rather later on, the industrial revolution was largely triggered by the advent of improved cast iron production methods in the early 18th Century, whilst the rapid industrial expansion of the Victorian period was only made possible by the cheap and plentiful supplies of steel provided by Bessemer’s converter.  It could also be argued that the expansion of air travel and the more recent digital revolution in the 20th Century both owe debts of gratitude to revolutions in the production of alloys based on aluminium and silicon respectively.

One result of this metallurgist’s slightly biased view of history is that metals tend to have a kind of historical pecking order, from the venerable metals of antiquity, such gold, silver, copper, lead and tin, through to the ‘classical’ iron, the steels of the modern age and those upstart ‘new’ metals – aluminium, silicon, stainless steel, rare earth magnets and so forth. How nice to discover whilst looking into material for this article then, that there are examples of important metals that eschew such clear distinctions and perhaps the stand out one of these is nickel. Along with its close cousin cobalt, it was only recognised as a distinct metal in the 18th Century and both were named rather delightfully after mythical sprites and goblins of the mountains. However, it turns out nickel was also used inadvertently in antiquity alongside copper to make bronze from almost the beginning of the bronze age.

So, it would seem this mischievous sprite of a metal has been hiding in the shadows of mankind’s history, long before being forced to emerge into the daylight as one of the most important metals of the 20th and 21st Centuries. Clearly, I need to revise my idea of where nickel lies in the metallic order of historical precedence! Nickel now reaches into many areas of our lives and whilst it is mostly used to produce stainless steel, it is also used in many other applications, including rechargeable batteries, coins, a coating material and as a basis for many catalysts.

In fact, the use of nickel as a catalyst was first discovered as far back as 1897 and although it was displaced somewhat by the use of platinum in the mid-20th Century, it is becoming more important again as a lower-cost alternative in several important reactions, including the hydrogenation of vegetable oils, reforming of hydrocarbons, and the production of fertilizers, pesticides, and fungicides. In addition to this trend and increasing stainless steel production, the growing electric vehicle market is also likely to support long-term nickel demand. It is projected that electric car production will increase three-fold from 2015 to 2020 and these cars could potentially use nickel-metal hydride batteries as an alternative to lithium ion batteries. 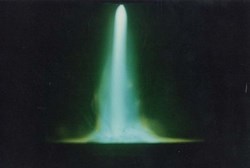 Plasma torch inside the furnace

Consequently, the demand for nickel across the whole range of applications has been increasing by around 5% per year since 2010 and looks set to continue this trend, significantly faster in fact than during the huge boom in nickel prices in the years leading up to the crash in metal prices in late 2007. When China’s manufacturing sector was booming, demand for nickel soared and nickel prices took off. High prices and high demand gave nickel mines a good reason to produce more.

However, when the global economic crisis hit in 2008, supply outstripped demand and prices have collapsed to a level last seen in 2004. But now, together with the growing demand, we see a shortfall in production. For example, lower output from the Philippines caused the global supply of mined nickel to fall by 5.3% during the first five months of 2016. Added to which, the enforced closure of a number of the country’s mines is forecast to cut its production capacity still further. Indeed, all nickel mining companies face a combination of persistent low metal prices and declining quality of ore. It is extraordinary to think that back in 1880, ores commonly contained over 10% nickel, whereas ‘good quality’ ores are down to typically only 1% to 2% nickel.1

So, with declining ore quality, falling mining output and growing demand, is it time to recycle more nickel? Undoubtedly.

Around 57% of nickel is already recycled within the nickel industry, with a further 14% ending up in other recycling loops, especially in carbon steel.2 Most of the recycled nickel comes of course in the form of stainless steel scrap and is recycled directly back into the stainless steel manufacturing process along with other major sources of nickel wastes. This very simple recycling route makes a large contribution to the high levels of nickel recycling generally. However, as the use of nickel as a catalyst for chemical processes and in other applications is expanding, so other recovery methods are becoming ever more important as a result of the different refining challenges these materials present at the point of recycling.
For example, nickel catalysts are used predominantly in refinery applications such as hydrodesulphurisation (HDS) where levels of sulphur pick up can be considerable, potentially creating difficulties in traditional stainless steel recycling routes. Many of these catalysts also contain large amounts of ceramic substrate materials (often alumina-based), the nickel is usually in oxide form and it is often mixed with other metals such as cobalt, molybdenum and vanadium (also often present as oxides), all of which can also present challenges to recycling technologies, many of which involve various hydrometallurgical routes. These challenges can include poor recovery rates, difficulties with extracting all the valuable metals in the waste or the generation of large quantities of other wastes. The relatively smaller quantities of these sources of nickel compared with stainless steel and nickel alloy scrap can also have an impact on the choice of recovery technology. 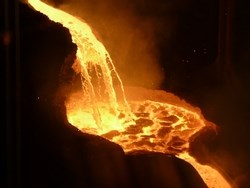 Tipping of metal and slag
in nickel recovery process

As a group, pyrometallurgical processes are amongst the longest-established nickel recovery methods available and tend to be especially suited to this collection of materials and their challenges. When coupled with roasting to remove the sulphur content, they offer the possibility of high recovery rates across a wide range of key metals whilst well-known further processes make them suitable for use in the production of stainless steels. Here the close links of many of these pyrometallurgical methods to traditional ferroalloy production are especially relevant, and DC electrical arc smelting is one of the most important of these.

Over the years, Tetronics’ DC plasma smelting technology is one example that has proved itself to be very adept at extracting nickel and other key metals such as chromium and molybdenum from EAF dusts, AOD dusts, millscale and various other wastes and sludges generated in the production of stainless steel. Plants in Italy and the North of England have been processing these wastes for around 25 years, providing a source of these valuable metals back to their adjacent steel plants in place of metals extracted from mining operations.3

This is also supported by decades of experience of ferroalloy production from a wide range of other secondary wastes and precious metals from industrial catalysts and catalytic converters. The inherent flexibility to process a wide range of input materials combined with high metal recovery rates and the highly compact, environmentally friendly and efficient nature of Tetronics’ DC plasma smelting plants makes them an obvious choice for this increasingly important niche secondary source of nickel. So, as the world looks for new environmentally-friendly methods to satisfy the growing demand for nickel, perhaps DC arc smelting techniques such as those provided by Tetronics’ plasma technology will prove to be the right technology at the right time.