A new pickling process which does not require the use of hydrofluoric acid has been developed as part of a project funded by the EU through the LIFE programme (project code: 13 ENV/IT/000440). The process is beneficial in terms of both the environment and energy consumption. This article analyses the characteristics of the wastewater treatment process deriving from the new pickling process which eliminates once and for all the presence of hydrofluoric acid in the base solution.

HFree Life Pickling is a project partially funded by the EU as part of the LIFE programme for improving the environmental sustainability of the production process of pipes in the oil & gas industry. The initiative is a partnership of three companies – the Italian manufacturer of pipes and fittings in stainless steel and special alloys Rivit, the German multinational chemical concern Henkel, and the Province of Vicenza, as a public organization which monitors performance with respect to environmental impact and workers’ health.

The project recently concluded at the end of May 2017 and has achieved the elimination of hydrofluoric acid from the pickling process used to make the large pipes employed in oil pipelines resistant to corrosion. Besides having a softer impact on the environment, the results obtained have also involved a 70% reduction in work times with consequent positive results in terms of energy saving.

Having ascertained the advantages of the process in production and energy terms, with beneficial economic and environmental impacts, the analysis shifted to the bath treatment phase used for electrolytic pickling and its impact on water drainage. The treated wastewater originates from the percolation of the baths when the pipes are removed from the pickling tanks, from the washing tanks in which the pipes are immersed and from final high-pressure washing.

The aim was therefore to make a comparison between the impact of a traditional pickling bath, used in duplex and super duplex alloys, and the electrolytic pickling bath, considering the chemical composition of the wastewater and the effectiveness of the chemical physical treatment process currently used to treat the traditional pickling wastewater. The first step involved the assessment of the two baths in initial conditions, and subsequently that of the two baths after a period of work, technically defined as “aged”. Afterwards, the efficiency was assessed of the process of treatment of a mixed solution obtained from the two aged baths, with the aim of highlighting any interference that may occur in the current treatment plant. Table 1 shows the characteristics of the 5 treated samples. 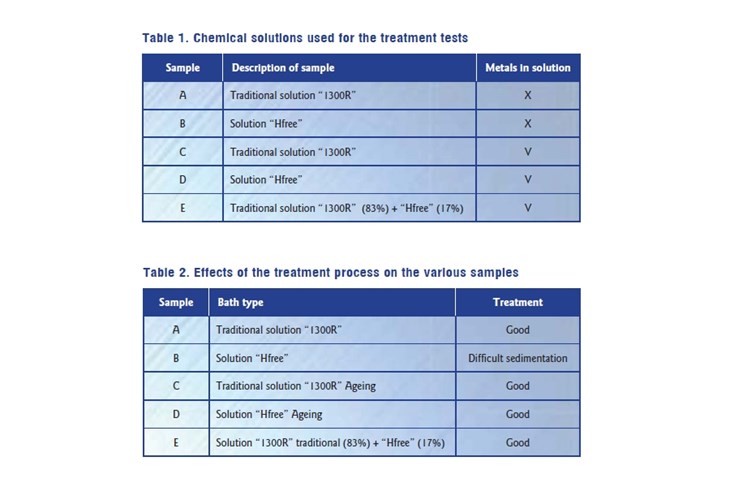 Baths A and B treatment

The solutions were used at the start of the pickling bath when there were no metals in solution, and the dilution was reproduced according to what occurs during the various washing operations in the traditional pickling process. The chemical physical treatment performed on the traditional bath confirmed, as expected, a good reduction of acids (hydrofluoric and sulphuric), while on the electrolytic bath it showed coagulation and therefore flocculation difficulty. More in-depth investigation and subsequent tests have attributed this to the carboxylic nature of the contained acids.

In the two samples C and D, having metals in solution, treatment produced excellent results on both samples. To assess any interferences in the current acid treatment system used in the electrolytic process, a mixed solution was reproduced of the two baths consisting in 83% of the traditional bath and 17% of the electrolytic bath (maximum percentage, on total standard production, of pipes treatable in the electrolytic pilot plant); in such tests, no anomalies were found and good treatment was obtained.

The first two tests, conducted on new solutions and which do not therefore in fact undergo treatment, have shown potential problems or anomalies in the chemical physical treatment process which can occur due to the nature of the new electrolytic solution used. Nevertheless, the presence of metals in solution, which occurs after a certain period of working time, would appear to inhibit this effect, making treatment effective. The solution made up of traditional pickling wastewaters and of the new electrolytic pickling process was treated without any anomalies being found with respect to the traditional treatment process.

During the tests, the consumption of the products used was monitored together with the analytical parameters of process conduction: further tests will be performed on waste pickling solution samples, i.e., with a limit concentration of metals in solution for the correct carrying out of the pickling and electrolytic pickling treatment. In conclusion, the “HFree” process does not present any particular difficulties as regards the treatment of the acids used in the process compared to traditional ones, but it eliminates, once and for all, the presence of hydrofluoric acid from the base solution and therefore also the fluorides from the treated waters.