Production at WMC Resources’ Olympic Dam operations in South Australia was interrupted following the failure of a heat exchanger in the sulphuric acid plant. Investigations revealed the likely cause was a failure of a cooling tube, leading to severe corrosion within the heat exchanger. The cause of the initial tube failure is still being investigated. The acid plant converts sulphur dioxide gas produced during copper smelting to sulphuric acid, which is used in other parts of the operations. The copper smelter and associated surface plants remain offline, however mining operations are continuing at full capacity, building stockpiles and advancing mine development schedules. Following this incident, WMC Resources CEO Andrew Michelmore initiated a review of operational performance at Olympic Dam. The review, to be headed by Dick Pettigrew, former Director of Asset Management Services at US chemical company Rohm & Haas, will focus on plant reliability and improvements necessary for consistent production performance. 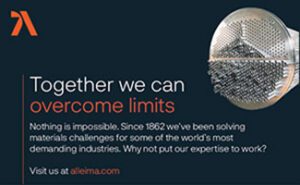