A medical spin-off from the University of Limerick uses a 5-axis Hermle VMC for all its machining requirements.

^ Daniel Murphy (left), Hooke Bio’s engineering manager, discussing the production of a prismatic base plate for an Enigma system with Shane Devitt.

It has been estimated that there are 1060 (one followed by 60 zeros) drug combinations covering chemicals, genomes, proteins, peptides and natural compounds that could be screened in an effort to find optimal and even personalised treatments for diseases. It is a fantastically large number and failure rate is high.
That is why pharmaceutical companies both large and small are interested in cost-effective, high-throughput screening (HTS), particularly as preclinical development accounts for 40 percent of the typical USD $2.5 billion cost of bringing a new drug to market.
Hooke Bio in Shannon, Ireland is leveraging the expertise of its multifunctional team to produce the first prototypes of a so-called Enigma HTS platform, which aims to use 3D cell cultures to generate more reliable data than current drug screening technologies at higher throughput than existing systems on the market.

As with any start-up business, initial costs have to be watched carefully before there is an income stream from sales. To this end, one measure that the firm has taken in the machine shop producing the stainless steel and aluminium components for prototype Enigma systems has been to purchase a German-built Hermle C 250 5-axis, vertical-spindle machining centre (VMC) through sole UK, Ireland and Middle East agent Kingsbury.
Hooke Bio’s R&D engineer Shane Devitt explained, “We wanted a 5-axis machine to produce components in one hit rather than two, as we need to hold tolerances down to ± 5 microns and that is difficult if a part has to be reclamped.
“Even with a drilled hole, where the accuracy of the diameter is defined by the cutter rather than the machine, it can have a slight offset if it has to be drilled from either side to meet in the middle and that causes a dramatic alteration to fluid flow.
“Unlike when early prototypes were being made at the University of Limerick on a 3-axis VMC of another make, work is now automatically repositioned in-cycle using the rotary axes of the Hermle. It allows us to hold the accuracies we need and there is no tolerance build-up.” 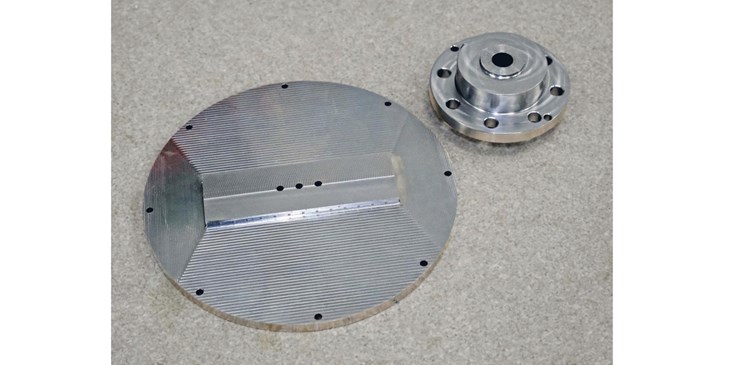 Engineering manager Daniel Murphy added, “We moved into our new premises on the Smithstown Industrial Estate in Shannon in April 2019 and the Hermle arrived soon after. We need to make around 40 different parts for an Enigma prototype platform, half of which are rotational and would normally be produced on a lathe. 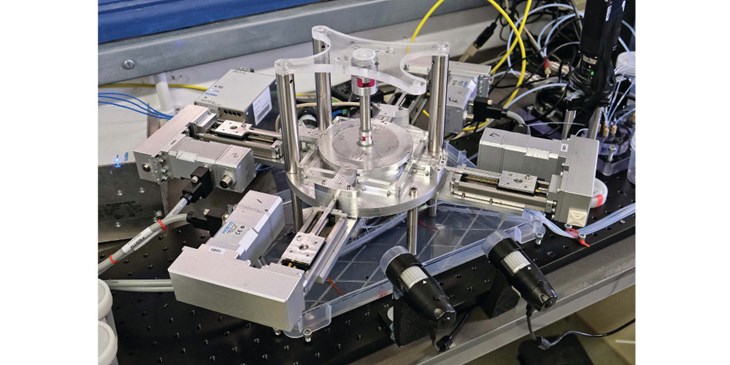 “To avoid the expense of investing in a turning centre at this early stage, we make all components on the VMC, despite it not having a torque table and integral turning capability, as that also would have cost more.
“Round components are produced by circular interpolation milling and the rigidity of the Hermle ensures that all features are within tolerance, especially as parts do not have to be transferred from a lathe to the VMC for prismatic machining.”
Hooke Bio’s choice of a trunnion-type 5-axis VMC rather than one with a B-axis spindle or knuckle-type table swivel was down to the ability of the trunnion design to hold tighter tolerances.
In an online paper published on Hooke Bio’s website written by executive chair Prof Mark Davies, professor of engineering science at the University of Limerick, chief operating officer Dr. Finola Cliffe and a PhD student at the University of Limerick, Anne O’Sullivan, the point is made that HTS is essential for screening vast numbers of drugs and drug combinations to assay their effects on cells, which are difficult to predict.
As a result, testing of such drugs becomes not so much a medical issue as an engineering project, which Hermle and Kingsbury are successfully helping the biotech company to undertake.