TÜV Rheinland Group has confirmed that CENTRAVIS met all requirements in the production of duplex steel tubes and has been granted the VdTUV 418 certification.

CENTRAVIS, a global supplier of high quality stainless tubes, has confirmed that its duplex tubes are produced in accordance with German industrial standards.

According to CENTRAVIS, this certification will ensure a 45% increase in the sale of duplex tubes in the German market. 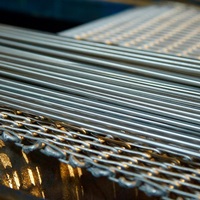 “Obtaining the TÜV Rheinland Group certificate will strengthen the company’s position with regards to the supply of duplex steel tubes to Germany, where the company’s products are in high demand,” said Head of Centravis Sales Germany, Nicholai Rosenthal. “Furthermore, VdTUV 418 certification validates yet again the quality of CENTRAVIS products, especially those made of duplex stainless steel grades.”

CENTRAVIS is also concentrating on the Scandinavian market. In August 2015, CENTRAVIS received NORSOK M-650 certification from an independent inspection company Ztrong Partner AS for the hot pipe production of tubes made of duplex and super duplex stainless steel grades. In September 2015, similar approval was obtained for the production of duplex and super duplex cold-deformed pipes.